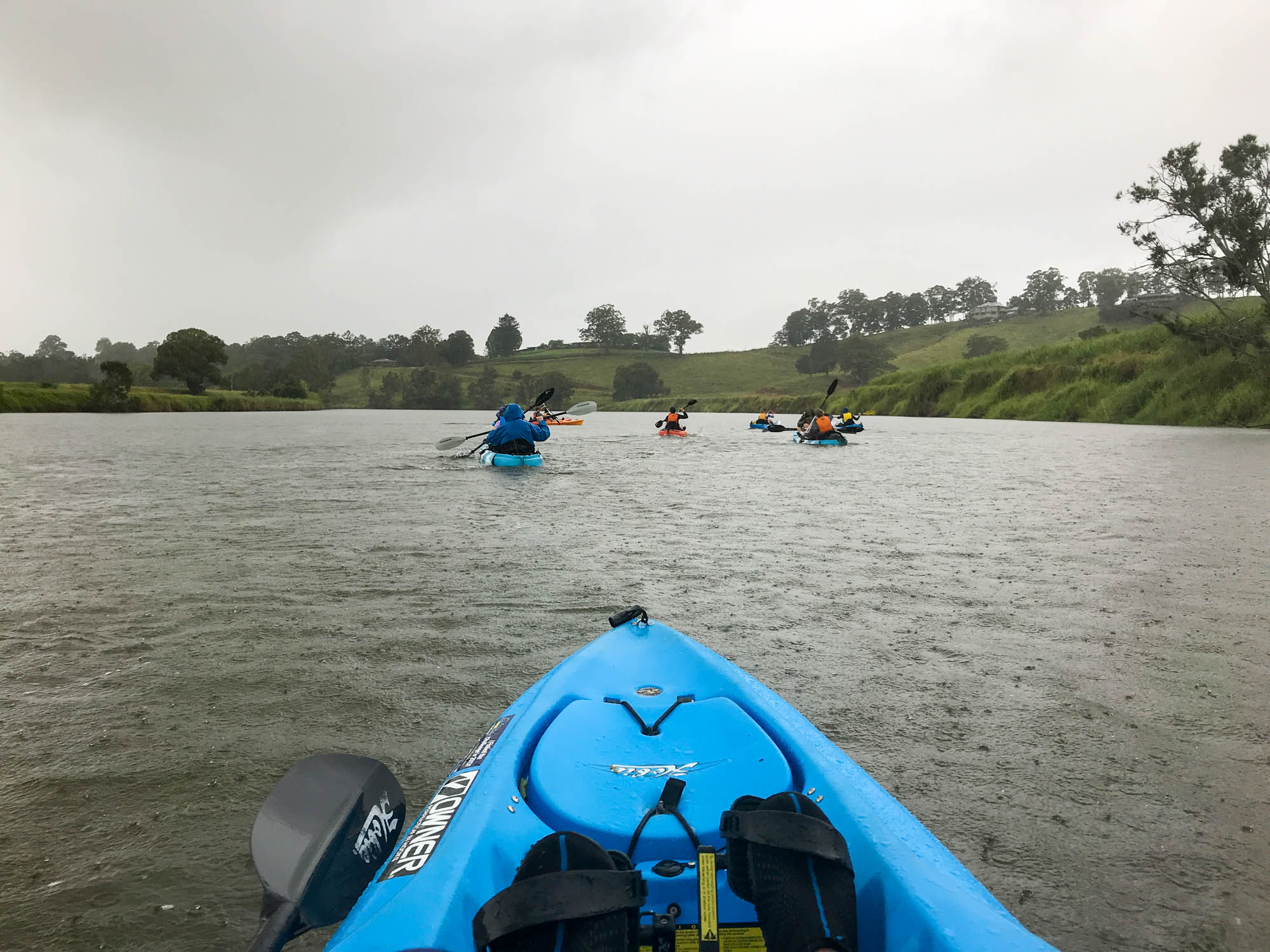 Friday morning, 29 April, started well – no rain was falling, despite the weather forecast for the weekend describing rain, rain and more rain. It took a little while for the Silver Duke of Ed students (Emma Adams, Riley Bayldon, Lewis Carger, Alexis Chau, Jessie Duduc, Jet Grimes, Lachlan Hammersley, Sophie Kent, Joseph Muller and Jack Seton) to bring all the kayaks down from their resting place and load them into the trailers. But once strapped down tight, all three cars headed off, loaded with people and gear. Mr Wotton and Mrs Tobler were there to guide and support this troop, but ultimately decisions about where to stop and for how long were up to the team.

Byangum Bridge on the Tweed River and about 10min drive south of Murwillumbah was our starting launch point. Hmm… we did bring all the kayaks except for the one not needed? Oops – we left two! Lucky that the double kayaks actually have a mini-3rd-seat, so Alexis squeezed in between Jessie and Jet and we were on our way (while Mrs Wotton drove back to the College to load the missing kayak ready for tomorrow’s leg). Intermittent rain punctuated the trip down the Tweed River, but with little wind everyone stayed reasonably warm wrapped in their lifejackets.

An hour or so later, our first break was at the Bray Park Weir where we needed to pull our kayaks out and portage around on the bank. It was as good as any time to stop and have a bite to eat too. After re-launching below the weir, we made reasonable time (especially now that everyone had realised we had limited daylight left and we still needed to set up camp). A game of tag and throw ball kept people practicing their paddling skills and sped us along. It wasn’t long before we slipped under the Murwillumbah Bridge and then paddled a few hundred metres further to the Rowing Club facilities. Here we pulled all the kayaks out and locked them together for the night.

Mrs Wotton had arrived with all our gear and it was starting to get cooler with night not too far away. With 12 of us, it took a few trips to ferry everyone to the Greenhill Caravan Park and night had started to close in, bringing with it patches of light rain. Fortunately, one of the first things we had done was set up a tarp to shelter to put our gear under – it also provided a place for some to start putting up the tents before choosing a spot on the wet grass. It was great to see how everyone was working together as a team and helping each other put up tents as quickly as possible (in an attempt to minimise rain entering the tent). Lessons were learned that night!

Hot showers and a gazebo with light helped to warm and provide a sheltered cooking place for everyone, though the rain didn’t look like giving us much of a break as it came through on regular intervals. Once in bed for the night everyone hoped that they would be able to stay in and the water would stay out – not likely! Most of us found that the well-used tents could have been a little more carefully put up (to keep the fly clear of the inner tent), better placed (not in a growing puddle of water) or just needed waterproof floor seams (why is my floor wet?). The resolve of some were definitely being tested despite the unpleasant night and seeping wet. Who would give up first and call mum or dad to pick them up and take them home? 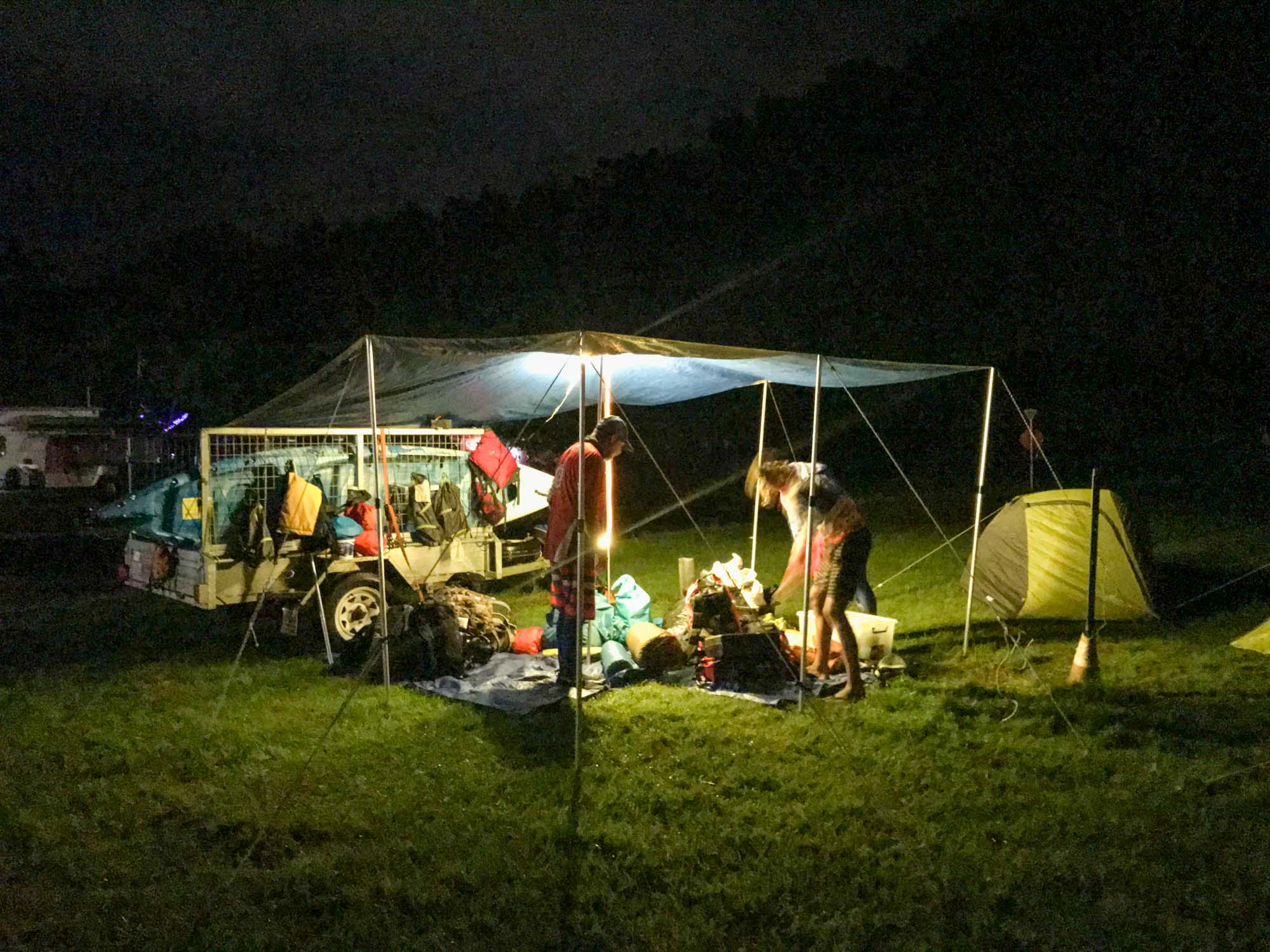 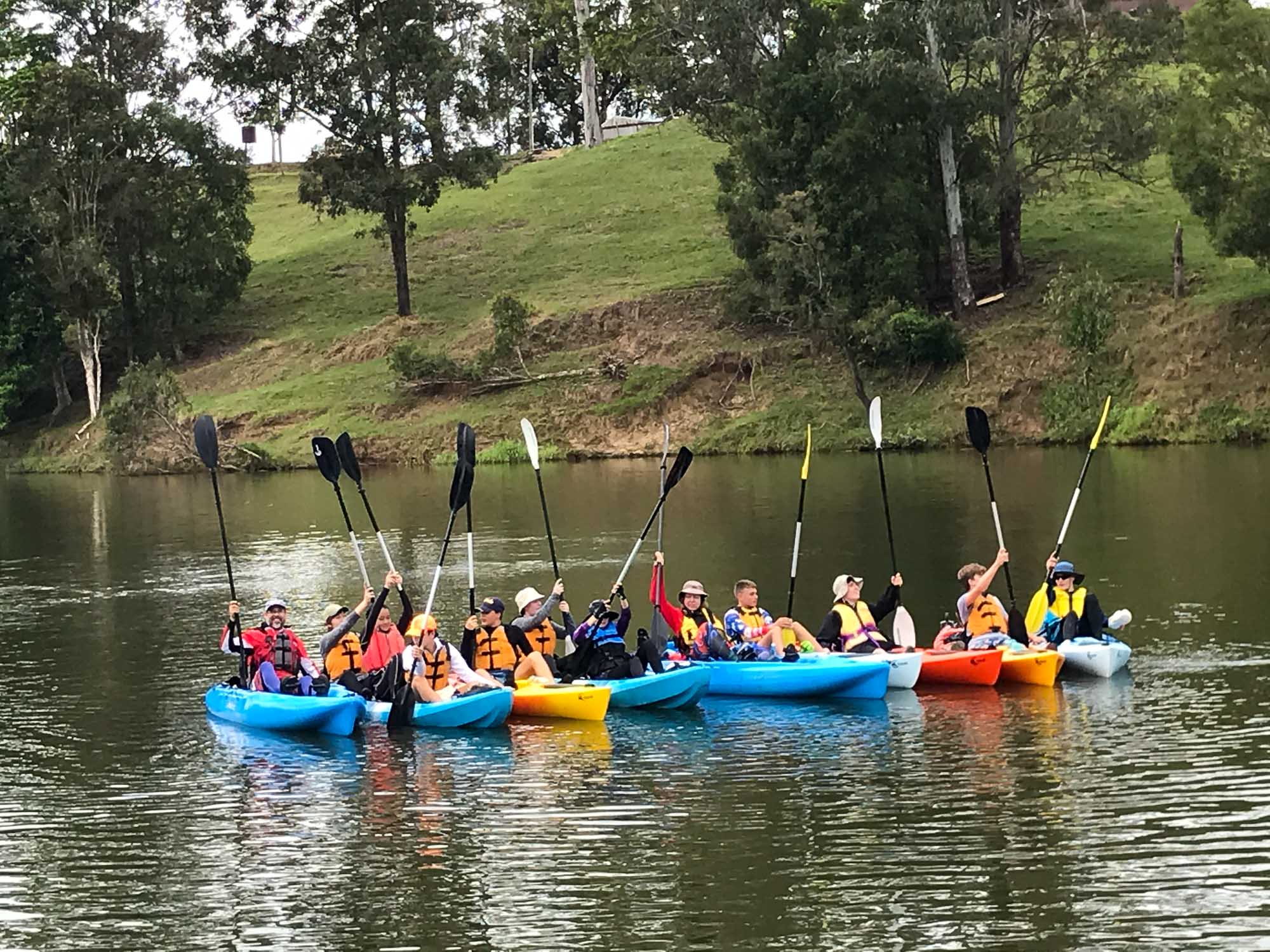 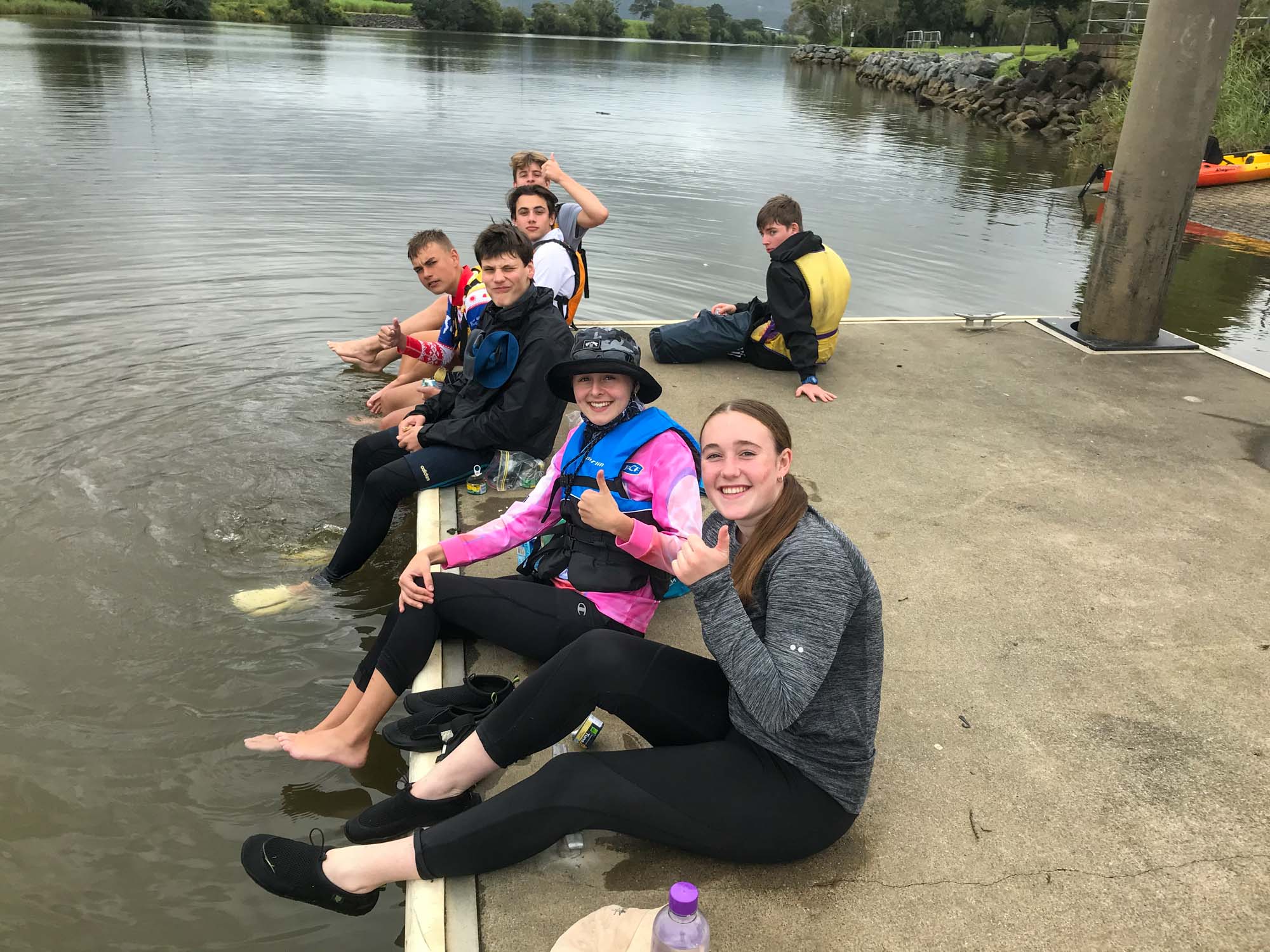 Saturday morning 30 April, despite still being overcast with some showers saying “Hello”, daylight brought renewed resolve, and everyone was keen to persevere! Mr Muller had also arrived to be our new ‘Ferryman’ and backup support. After breakfast and the decision to continue on to Tumbulgum, all the tents were packed wet into their bags hopefully to see a drier afternoon to be reset up. A couple more trips in the car back to the Rowing Club and everyone was back into the kayaks (with one more single in the water, and a swap for new double kayakers over leg two!).  The weather was still overcast – but had fined a little. The Condong Sugar Mill was interesting to view from the river and with a stop at the Clarrie Purnell Park and boat ramp just a kilometre further downstream for lunch, we were making good time.  It took us a good three hours of paddling to travel the 9km on Day 2 (including break). But Tumbulgum and then our destination (the Seventh-day Adventist Church) on its opposite shores didn’t take too much extra effort to reach. With Mr Muller waiting for us (and those wet tents), it was the muddy shore that provided some comic relief as Jack struggled to reclaim his footwear from the knee-deep mud and squelch through to solid ground. Everyone else learned from his experience and made an effort to get closer and find a more solid footing spot to get out and slide the kayaks up.

We had a great looking piece of flat grass right beside the river that had been organised for us by the pastor of the church, but it was looking like a bigger cell of rain was on its way. God is always good though, and just as we were exploring options, Alwyn (one of the church elders) turned up and offered the church hall to stay in rather than drenched tents. It was a chorus of “Yes!” and “Thank you!” all ‘round. With kayaks securely tucked in the church grounds, we made our way up the steep driveway and into our luxury accommodations (well luxury compared to soaked tents). Dry, clean, carpet on the floor, toilets and even a hot shower – we were glamping, not camping! Arriving in daylight also meant we could kick a ball around for a while as others played some card games. Later, a covered veranda and lighting made cooking also a gastronomic experience, and there were some excellent meals cooked and enjoyed. More card games, a spot of gruesome murdering (the game – not any real deaths, all nine came back! No, I mean 10). Even a little spotlight was squeezed in by 10pm and then it was lights out and time for the body to rest and prepare for our last day of kayaking down to Chinderah… Sorry about the snoring (Mr Wotton), but at least I didn’t sleep talk!

Sunday morning, 1 April, and we were up and at’em by 6:30am. How it takes three hours to pack up some sleeping bags and cook some dinner I don’t know. It might have had something to do with cooking breakfast (especially the pancakes – thanks Mrs Tobler and cook Sophie). But a target of 9:30am had been set to depart and they stuck to it! Though being the bottom of the bottom of the tide there was no way that we were going to be able to launch where we arrived. The water was now at least three metres back from the start of the thick mud shore. After scouting further down the river, we were able to find a new launch site where rocks replaced mud and we were off again! This time our destination was a good 11km away at Chinderah, but we were against the tide and the wind (which had just started to blow). However, after our first couple of kilometres and brief stop to discuss wind tactics, the wind abated, and the sun even started to shine. Paddling along was enjoyable and we were making great time. Despite nowhere to land for morning tea, we made the most of rafting up, and the two Hobie peddle kayaks provided forward motion while everyone snacked on some refreshments. It was nice to see such lovely mountains overshadowing the river, and the variety of bankside growth (trees, palms, farmland, dense forest) made for an interesting vista.

The estimated time of arrival for Chinderah was 1pm and we were going to make it. A few calls to out rides half an hour out ensured that moments after we arrived, we were able to pull the kayaks out and start loading them back into the trailers. After loading everyone back into the cars, it was just a short drive back to the College. In a flurry of activity, kayaks were back into their nest, bags and gear were unloaded and re-grouped ready for the ride home. Yes, wet tents would still need drying and re-packing. Smelly clothes worn for three days along with the damp clothes from Friday night needing washing. Even another hot shower was in order – but what a great weekend!! So many things learned for the next trip. It was so good getting to know this group of adventurers better – seeing the mettle they are made of. I do hope that it won’t be raining when we go to Morton Island though 😉.